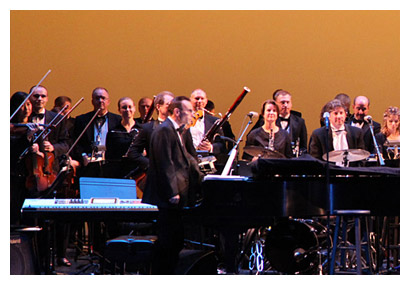 A Salute to Our Veterans

In observance of Veterans Day, this celebrated pops orchestra presents a concert of uplifting pops sounds to honor all of those who have served and sacrificed to keep us safe. Enjoy a lively program of patriotic favorites and American standards including "You're a Grand Old Flag," "American Salute," "Liberty Fanfare" by John Williams, and other works by Aaron Copland. Of course, no patriotic concert is complete without a stirring medley of John Phillips Sousa marches, including "The Stars and Stripes Forever." In this special concert, the talented musicians of the American Festival Pops Orchestra give an exuberant performance, conducted by the charming and accomplished conductor, Anthony Maiello.

Holiday Pops: Songs of the Season

Just hear those sleigh bells jingling ring-ting-tingling, too. It's time for the holidays at the Center as the American Festival Pops Orchestra comes home for Christmas with their annual decking of the Concert Hall. The orchestra's glorious music fills the air, spreading holiday cheer to audiences of all ages. Join us for this popular family tradition, complete with holiday favorites and a lively carol sing-along -- always a concert highlight. Conducted by founder and Artistic Director Anthony Maiello, this pops orchestra brings together the most talented musicians from the metro area to perform the best of the season, including Leroy Anderson's "Sleigh Ride," "Christmas Festival," and other treasured classics. It's our way of wishing you and yours a happy holiday..

Love is in the air as the official holiday of romance approaches, and our favorite pops orchestra sets the perfect mood with an evening of romantic standards. The American Festival Pops Orchestra has become a treasured tradition here at the Hylton thanks to the orchestra's virtuosity, masterful interpretations, and entertaining programs. This performance is its love letter to the Great American Songbook, featuring some of the 20th century's most popular and beloved melodies and movie love themes. Under the inspired leadership of conductor Anthony Maiello, the most accomplished musicians in the region come together for this special evening to present a romantic program of cherished music.

Enjoy favorites from the Beatles to Charlie Daniels, and Duke Ellington to Elvis Presley! Featuring guest artists Chris Vadala, saxophone; Darden Purcell, jazz vocals, and AFPO’s own Concertmaster, Peter Wilson, violin, the American Festival Pops Orchestra presents an entertaining program including "Devil Went Down to Georgia," "Yankee Doodle," "Take the A Train," "In a Sentimental Mood..." and more. Founder and Artistic Director Anthony Maiello has gathered 60 of the finest musicians in the D.C. area to create this extraordinary orchestra, which has delighted audiences at the Hylton Center with its interpretations of classic pops music. "Classic, upbeat, popular Americana performed with professionalism, affection, and more than a bit of pizzazz." (Washington Times) There’s something for everyone in this celebration of pop, rock, country, and jazz!

The American Festival Pops Orchestra comes home for the holidays with a joyful performance of beloved Christmas carols, holiday tunes, and seasonal melodies that will warm the hearts and lift the spirits of young and old alike! This festive concert features the AFPO Holiday Brass Quintet, a special guest narration of “Twas the Night Before Christmas,” and festive favorites including “The Holly and the Ivy,” Jingle Bell Rock,” and Leroy Anderson’s “Sleigh Ride.” Under the baton and leadership of Anthony Maiello, this orchestra features the finest musicians in the greater D.C. area in an this evening of traditional holiday music complete with an audience sing-along!

Northern Virginia’s very own jazz orchestra presents an evening of down-home sophistication in The Gospel Truth, an evening of blues-drenched hand-clapping American music with a gospel twist. Bobby Floyd, an accomplished jazz pianist and organist whose natural ability was first discovered at the age of two, has shared the stage with legends such as Dionne Warwick, Doc Severinson, and Arturo Sandoval and now he joins this ensemble of gifted musicians from the D.C. area. Artistic director and alto sax virtuoso Jim Carroll’s long and illustrious career has included performances with the likes of Michael Jackson, Nancy Wilson, Maynard Ferguson, Billy Taylor, Woody Herman and His Thundering Herd, and the Smithsonian Jazz Masterworks Orchestra. Most recently, he led the Mason Jazz Ensemble on a whirlwind tour of China, where they played to sold-out houses. Join us for what is fast becoming a Hylton Center favorite!

Join this spirited ensemble for a journey through the world of film in a delightful program that includes some of the best music of the silver screen, including favorites from film giants John Williams, Hans Zimmer, James Horner, and Danny Elfman. The music also includes “Gabriel’s Oboe” (the theme from The Mission) played by former New York Philharmonic Orchestra Prinicipal Oboist, Joe Robinson. Then, get an inside look into the film industry when motion picture and television composer, Vincent Oppido, leads a live film score recording. “Professionalism, affection, and more than a bit of pizzazz,” raves the Washington Times about this Northern Virginia pops orchestra sensation.


An Evening of Classics

Enjoy a splendid evening listening to your favorite music presented by Northern Virginia's very own pops orchestra. For this special concert, American Festival Pops Orchestra performs hits from Broadway and Hollywood, light classics, and rousing anthems of the Armed Forces. Conductor and Artistic Director Anthony Maiello leads this accomplished ensemble, composed of 60 of the most talented musicians from the greater D.C. area. A longstanding favorite at the Center for the Arts, the orchestra has a large following of devoted fans who find their performances of treasured pops music thoroughly delightful. "[American Festival Pops Orchestra] performed crisply and with great enthusiasm under the baton of Maestro Maiello." (Washington Times)

Capture the sheer joy of the Christmas season when this talented pops orchestra comes home for the holidays with a jubilant concert of cherished Christmas carols, holiday tunes, guest soloists, and the traditional sing-along. This jubilant concert features a spectacular program that includes the American Festival Pops performing favorites “Christmas Festival” by Leroy Anderson, “Carol of the Bells, “Blue Christmas” and an entertaining twist on the holiday classic, “The Nutcracker Suite,” with selections performed in both traditional (Tchaikovsky) and jazz stylings (Duke Ellington). AFPO is also pleased to present Hylton Center’s Executive Director Rick Davis performing a narration of “Twas the Night Before Christmas.” Don’t miss these festive and sentimental favorites and more. Under the baton and leadership of founder and artistic director Anthony Maiello, these gifted musicians from the greater D.C. area bring an evening that is sure to fill everyone with Christmas cheer.

The joy and magic of the holiday season comes alive when this energetic and polished pops orchestra presents a festive concert of cherished Christmas carols, holiday favorites, guest soloists, and the popular audience sing-along. Under the baton of founder and Artistic Director Anthony Maiello, these talented musicians from the greater D.C. area make the holidays merry and bright with an evening of musical holiday cheer.

Ring in the season with this lively pops concert, now considered a "can't miss" part of the holidays here at the Hylton. This beloved pops orchestra, conducted by founder and Artistic Director Anthony Maiello and comprising some of the most gifted musicians from the metro area, spreads holiday cheer with treasured Christmas carols, seasonal favorites, a few festive surprises, and special guest soloists. One of the evening's highlights is the high-spirited audience sing-along. This season, make your Christmas merry and bright with this jubilant evening of cherished holiday music.

Treat your Valentine to an evening of romance, and enjoy today’s most cherished love songs performed by our favorite pops orchestra. In this special Valentine’s Day concert, the American Festival Pops Orchestra performs romantic standards and treasured love songs from the Great American Songbook. Founder and Artistic Director Anthony Maiello has assembled some of the finest musicians in the region to create this ensemble, renowned for its musical virtuosity and its delightful interpretations of the 20th century’s most beloved music. Make this Valentine’s Day extra special for you and your sweetheart with a delightful evening of music that you’re sure to love.